Vote No on Prop A

At the July General Meeting the KC Heart of American Green Party voted to endorse the following statement about the importance of a NO vote on Proposition A in the August 7th election:

The Economic Plank of the Missouri Green Party advocates, among other worker rights, “Worker control through strong unions,” and even includes the verbiage, “Repeal the bogus ‘right to work’ law.” One of our party’s ten key values, Community-Based Economics, includes “restricting the size and concentrated power of corporations.” 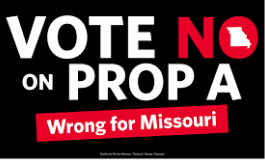 Thus, We Are Missouri’s campaign to vote “no” on Proposition A--legislation promoted and coordinated by out-of-state billionaires, super PACs, and other corporate interests with the intent of expanding their already dominant range of power, and destroying unions in the process--represents nothing less than a call to action for Green Party rank and file.
Many of us worked hard on petitioning to get the proposition on the ballot for voter referendum, and now we must continue the fight. Originally slated for the November ballot, the cynically-named “Right to Work” measure  was fast-tracked by Republican lawmakers, who apparently hope a lower voter turn-out in August will assist its passage. Between now and August 7th, we should commit to working with the “Vote No” campaign, to ensure this attack on democracy and justice is soundly defeated.
The past several decades have witnessed a corporate backlash against democratic unionism,   which has resulted in the loss of many workers rights acquired through past labor struggles,   and it is therefore imperative that The Kansas City Green Party work in conjunction with labor unions to bring attention to the socio-economic injustices  resulting from the undermining of unions, and together struggle to reverse its effects.