Don Fitz has used his State Auditor campaign to envision how the little known State Auditor's office can shine a light on many of the most pressing issues in our state and help make change. Read below how electing Don Fitz as State Auditor will help Missouri house our veterans, improve education funding, make the case for decriminalization of marijuana, challenge the state use of pesticides and herbicides, and prepare for Medicare-for-all. 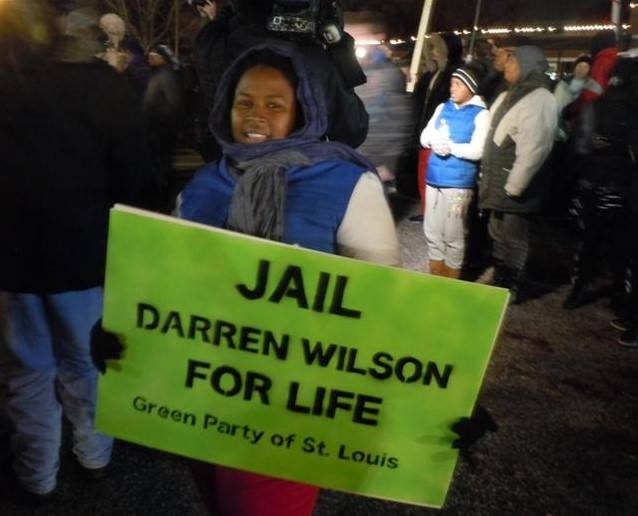 Who is the ONLY candidate for MO State Auditor concerned with people of color?

Other candidates have nothing on their website about looking at racism in Missouri. 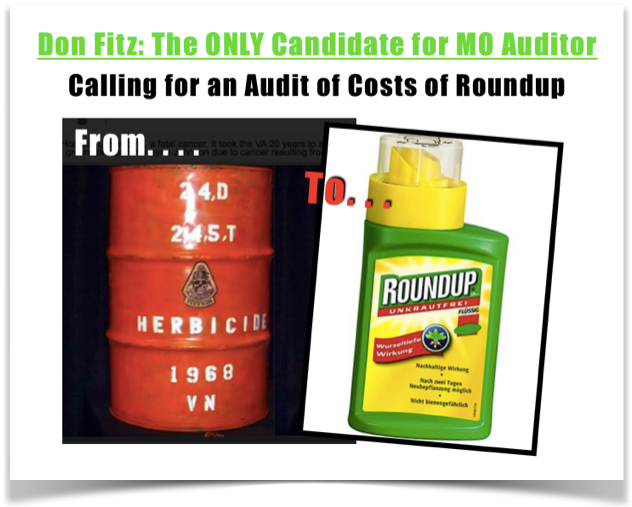 On October 6, 2018 Green Party candidate for Missouri State Auditor Don Fitz spoke at Mineral Area VFW Post 5741. In this brief movie clip, he explains that Monsanto produced the Agent Orange used in Viet Nam and currently produces Roundup, which is used throughout the state. Both are herbicides which cause Non-Hodgkin Lymphoma, a fatal cancer. It took the VA 20 years to acknowledge the link. In July 2018 a San Francisco jury awarded $289 million to groundskeeper Dewayne Johnson due to cancer resulting from his exposure to Roundup. On October 21, a judge rejected Monsanto’s appeal.

Don Fitz is the ONLY candidate for MO State Auditor calling for an audit of costs of purchasing Roundup and other pesticides/herbicides for use on Missouri’s:

Don Fitz will also audit potential costs for litigation from lawsuits from workers, students and residents for health damage from pesticide/herbicide usage by the state of Missouri.

None of the other candidates for MO State Auditor say anything about auditing costs and damages resulting from the use of Roundup. 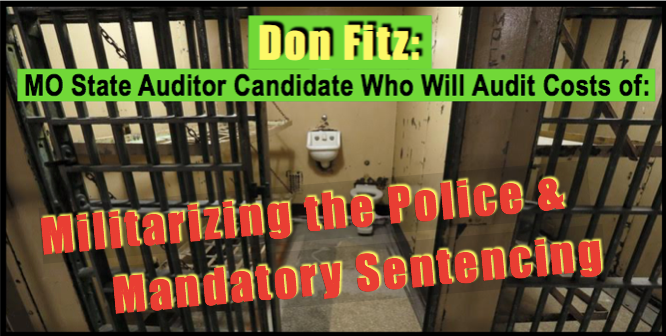 Green Party candidate Don Fitz is the ONLY candidate who will audit all costs associate with:

All audits will examine possible costs to Missouri as a result of litigation for misuse and abuse as well as whether these practices actually reduce crime and make us safer. 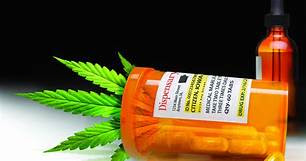 Too many veterans have chronic pain to deny them the right to use marijuana.

On October 6, 2018 Green Party candidate for Missouri State Auditor Don Fitz spoke at Mineral Area VFW Post 5741. In this brief movie clip, he explains that services for vets could be expanded if Missouri would stop wasting money on the criminalization of marijuana. Many vets with chronic pain want to avoid opioids or other drugs that are highly addictive. For them, marijuana/cannabis is the best choice. But Missouri’s criminalization of marijuana forces these vets to choose between continuing the pain or possible jail time.

Don Fitz plans to examine how much money the state wastes training police and dogs to find marijuana, trials and appeals for marijuana arrests, imprisoning people for marijuana and hiring parole officers for those with marijuana convictions. As State Auditor, Don Fitz will also look at health costs related to denial of medical marijuana to recipients of Medicare, Medicaid and all other state-funded treatment entities. He will estimate how much could be saved by making medical marijuana available.

Don Fitz is the only candidate who advocates expanding services to vets by decriminalizing marijuana. 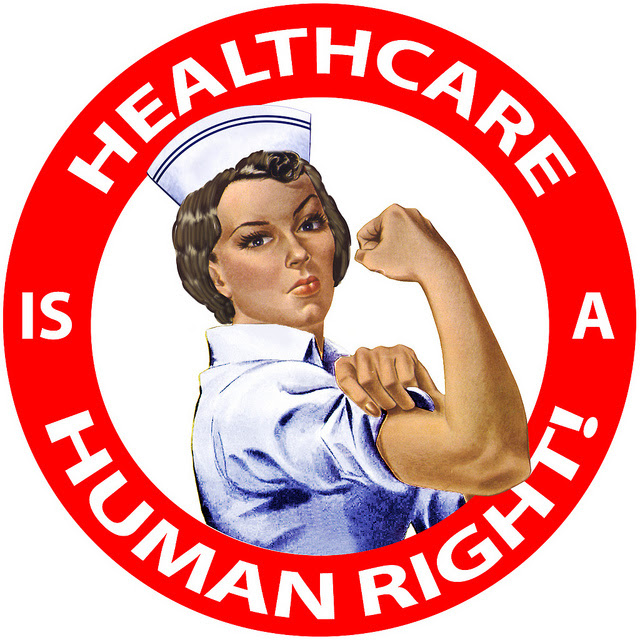 Which candidate for MO State Auditor is preparing for MEDICARE-FOR-ALL?

Green Party candidate Don Fitz is the ONLY candidate who points out that the purpose of Missouri Medicaid is to help the indigent and under-served get the health care they need. He will help pave the way for MEDICARE-FOR-ALL by auditing:

None of the other candidates for MO State Auditor or say anything publicly about auditing how much state money is wasted by privatized medical care. Both of the big money parties are buying ads about pre-existing conditions, rather than discussing MEDICARE-FOR-ALL. Don’t let them confuse you into believing that health INSURANCE is the same as HEALTH CARE. It is not. 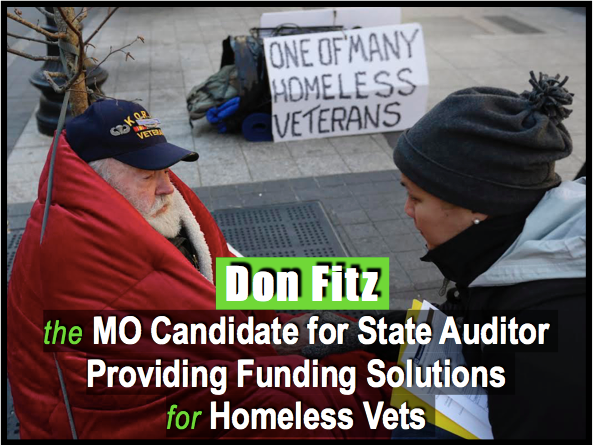 Of America’s homeless population, 23% are veterans. Yet, Missouri does not provide vets with adequate ...

On October 6, 2018 Green Party candidate for Missouri State Auditor Don Fitz spoke at Mineral Area VFW Post 5741. In this brief movie clip, he explains that services such as these could be expanded if Missouri would stop wasting money on purchasing cancer-causing Roundup, privatizing medical care, and criminalizing marijuana.

None of the other candidates for MO State Auditor say anything about finding funds to expand services for homeless vets by not wasting money. 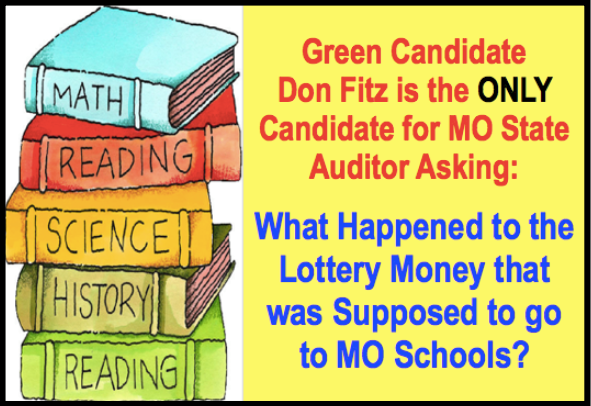 Only one candidate for MO State Auditor asks “What happened to the lottery $ that was supposed to go for schools?”

When Missouri voters approved the lottery that began in 1988, they were promised that proceeds would go toward education. Green Party candidate Don Fitz is the ONLY candidate who will audit:

None of the other candidates for MO State Auditor say anything about auditing the use of state money for education (or not using enough for education). 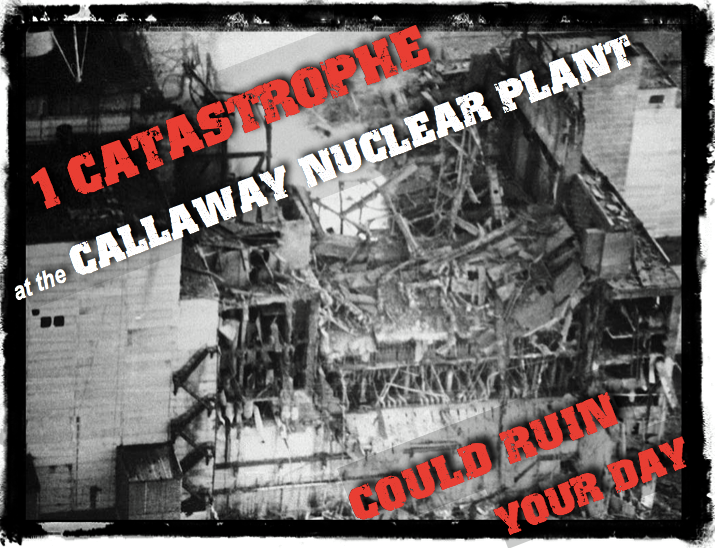 None of the other candidates for MO State Auditor say anything about using audits to challenge climate change and nuclear insanity.
_________________
The photo portrays the April 1986 catastrophe at Chernobyl. 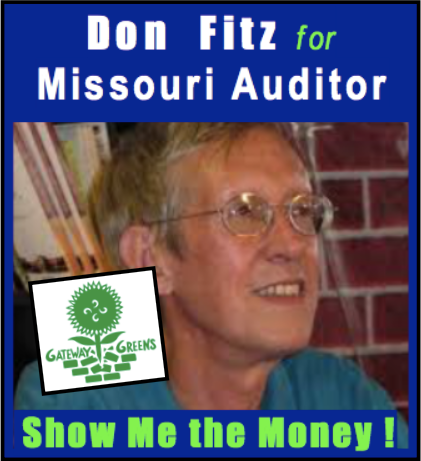