KC Greens Join the March for Our Lives

MARCH FOR OUR LIVES

Thousands attended the March for Lives in Kansas City. The Green Party showed up, in a sea of blue, to talk about gun control, demilitarization of the police and military abroad and the ways our members and candidates are working to build a more peaceful planet for the future.

When we talk about gun violence, we must also talk about the police. At the march, in addition to supporting the students and their calls to end gun violence, members also gathered signatures for the Clean Act and New Approach Missouri.

“I am inspired by the call to action to hold politicians accountable for their corporate donors and to call out their values in relation to their campaign financiers.” - Elyse, Green Party Member 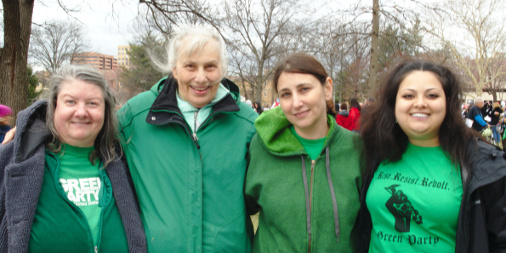 We march to say "Enough!" Weapons are not more important than people. It is past time for elected officials to value the lives of Americans over NRA lobbyists. Performances, including music, slam poetry and speeches from students, community activists and family members of people killed by gun violence.