Solidarity with Sex Workers: The Dangerous Misdirection of FOSTA/SESTA

These bills will only further criminalize sex workers and put them, along with victims of sex trafficking, at more risk.The Green Party of Kansas City, Missouri stands in solidarity with Sex Workers and against sex trafficking. 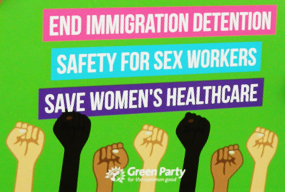 Many sex workers and activists are calling for the decriminalization of sex work. We join them in these calls and are actively integrating this into our developing local, state, and national Green Party platform.

Draconian legislation like FOSTA/SESTA are taking sex workers and the victims of sex trafficking and pushing them further into the shadows. Websites such as Backpage and personals on Craigslist, can now be prosecuted if they "facilitate traffickers in advertising the sale of unlawful sex acts with sex trafficking victims" or support the "promotion or facilitation of prostitution.” Craigslist has since removed their personals section from their website.

Despite working in a socially secluded industry, women today have much to thank sex workers for as they have been on the front lines of advocating both women's, queer folks’ and workers' rights in and outside of their industry. As fellow workers and as socialist feminists, we stand with them.

FOSTA/SESTA will make it much harder for sex workers to screen their clients and will force those using online resources to rely more on “street-based” sex work, which can be more dangerous. However, these bills go beyond sex workers’ ability to safely book clients, it is even retroactive. Former sex workers can now be banned if they discuss having previously been in the industry.

FOSTA/SESTA are not the answer to addressing human trafficking. Punishing sex workers, taking away their online communities and removing ways they can safely vet clients is not the answer. We must take a stand against these bills and stand in solidarity with Sex Workers in Kansas City and throughout the country and develop real solutions to support victims of human trafficking.

Sources for further reading on the issue:

Roderick, Leonie. “What We Owe to the Hidden, Groundbreaking Activism of Sex Workers.”Broadly, 8 Mar. 2017, broadly.vice.com/en_us/article/8x4gmx/what-we-owe-to-the-hidden-groundbreaking-activism-of-sex-workers?utm_source.

If someone else thinks of more ways that people can help sex workers, please add it to the comments and we will add to this post and share on our Facebook.